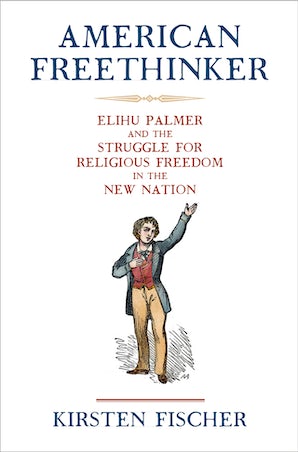 The first comprehensive biography of Elihu Palmer tells the life story of a freethinker who was at the heart of the early United States' protracted contest over religious freedom and free speech.

When the United States was new, a lapsed minister named Elihu Palmer shared with his fellow Americans the radical idea that virtue required no religious foundation. A better source for morality, he said, could be found in the natural world: the interconnected web of life that inspired compassion for all living things. Religions that deny these universal connections should be discarded, he insisted. For this, his Christian critics denounced him as a heretic whose ideas endangered the country.

Although his publications and speaking tours made him one of the most infamous American freethinkers in his day, Elihu Palmer has been largely forgotten. No cache of his personal papers exists and his book has been long out of print. Yet his story merits telling, Kirsten Fischer argues, and not only for the dramatic account of a man who lost his eyesight before the age of thirty and still became a book author, newspaper editor, and itinerant public speaker. Even more intriguing is his encounter with a cosmology that envisioned the universe as interconnected, alive with sensation, and everywhere infused with a divine life force.

Palmer's "heresy" tested the nation's recently proclaimed commitment to freedom of religion and of speech. In this he was not alone. Fischer reveals that Palmer engaged in person and in print with an array of freethinkers—some famous, others now obscure. The flourishing of diverse religious opinion struck some of his contemporaries as foundational to a healthy democracy while others believed that only a strong Christian faith could support democratic self-governance. This first comprehensive biography of Palmer draws on extensive archival research to tell the life story of a freethinker who was at the heart of the new nation's protracted contest over religious freedom and free speech—a debate that continues to resonate today.

Epilogue. Into the Future

"Given the paucity of information about Palmer and his limited literary output, it wouldn’t seem at first glance that he was a very promising subject for a full-length biography. Fischer, however, does a masterful job of filling out the book by carefully contextualizing Palmer’s life and work in his era...Using the life of Elihu Palmer as its entrée, Kirsten Fischer’s American Freethinker serves as an admirable introduction to the history of Enlightenment-inspired radical religion in the United States"—Nova Religio

"American Freethinker is a masterful account of a fascinating but understudied figure. Kirsten Fischer has uncovered a trove of new information about Elihu Palmer and has written a definitive biography that will be of interest to specialists, students, and general readers interested in the religious, cultural, or political history of the early republic."—Seth Cotlar, author of Tom Paine's America: The Rise and Fall of Trans-Atlantic Radicalism in the Early Republic

"With crystalline prose, Kirsten Fischer rescues Elihu Palmer from obscurity and, more importantly, sets his ideas against the broad religious and intellectual contexts of the early United States. Her investigation extends beyond one iconoclastic freethinker to show the vibrancy of the period's intellectual climate and the dynamism of freethought. This is a book of enduring significance."—Erik R. Seeman, author of Speaking with the Dead in Early America