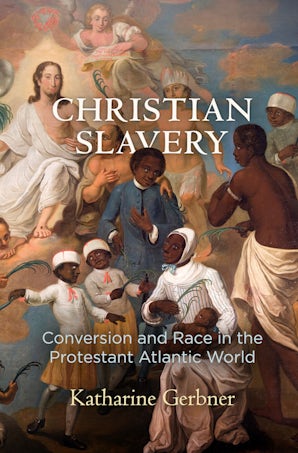 Conversion and Race in the Protestant Atlantic World

Could slaves become Christian? If so, did their conversion lead to freedom? If not, then how could perpetual enslavement be justified? In Christian Slavery, Katharine Gerbner contends that religion was fundamental to the development of both slavery and race in the Protestant Atlantic world. Slave owners in the Caribbean and elsewhere established governments and legal codes based on an ideology of "Protestant Supremacy," which excluded the majority of enslaved men and women from Christian communities. For slaveholders, Christianity was a sign of freedom, and most believed that slaves should not be eligible for conversion.

When Protestant missionaries arrived in the plantation colonies intending to convert enslaved Africans to Christianity in the 1670s, they were appalled that most slave owners rejected the prospect of slave conversion. Slaveholders regularly attacked missionaries, both verbally and physically, and blamed the evangelizing newcomers for slave rebellions. In response, Quaker, Anglican, and Moravian missionaries articulated a vision of "Christian Slavery," arguing that Christianity would make slaves hardworking and loyal.

Over time, missionaries increasingly used the language of race to support their arguments for slave conversion. Enslaved Christians, meanwhile, developed an alternate vision of Protestantism that linked religious conversion to literacy and freedom. Christian Slavery shows how the contentions between slave owners, enslaved people, and missionaries transformed the practice of Protestantism and the language of race in the early modern Atlantic world.

"There are a number of things to recommend Gerbner's welcome study. Throughout the text she reminds readers that the English, Dutch, and some French colonists in the Caribbean were arguably shaped more by their Protestantism than any national attachments. That this was especially the case in their engagement with slavery is an important revelation. She is also good at exploring and imagining the response of slaves and free blacks to the evolving theology of slavery that was gradually strengthening slavery's grasp in every corner of the Atlantic world. Perhaps most of all, she shines a light on Christianity's complicity in the development of modern racism."—Journal of Early Modern History

"In case we thought that North American problems with slavery were homegrown, Katharine Gerbner shows in great detail how the same problems existed in the colonized islands of the Atlantic as far back as the early seventeenth century- and indeed were imported directly from these islands to Maryland, South Carolina, and other Southern colonies . . . Her judgment is harsh. But it is a judgment based on impeccable research. Christian Slavery is the sort of well-grounded microhistory that, in the end, proves more valuable than wide-ranging surveys and broad declarations."—Commonweal

"In looking at this relationship between white-exclusivist 'Protestant Supremacy,' the formation of a paternalist Christian Slavery that encouraged conversion of blacks but discouraged their literacy, and the role of Africans and African Americans in compelling (through their words and actions) a rethinking of the relationship between Christianity and slavery, Gerbner has given us a new synthesis that incorporates the Atlantic world perspective beautifully. And she has given us another version of the grim irony of Southern religious history."—Journal of the American Academy of Religion

"Gerbner's facility with Old German Script and Dutch documentary evidence has furnished a much-needed revision of the story of Christian Slavery, uncovering vital evidence for understanding the emergence of White Supremacy. Her focus on the Caribbean Islands is vital, given the fact that slavery there far outweighed slavery on the mainland. Finally, Gerbner's contribution on the role of literacy as an empowering tool for the oppresssed is significant."—Fides et Historia

"How and why did Christianity, seemingly built on spiritual emancipation and equality, give blessing to African slavery in the Americas? Christian Slavery is a powerful new interpretation of this question that will inspire scholars to rethink the connections between religion, race, and slavery in the early modern Atlantic world."—Jon Sensbach, University of Florida

"With impressive chronological and geographical breadth and a clear-eyed, transdenominational perspective, Christian Slavery reveals how the religious programs of early Quakers, Anglicans, and Moravians all became entangled with colonial slavery."—Travis Glasson, Temple University