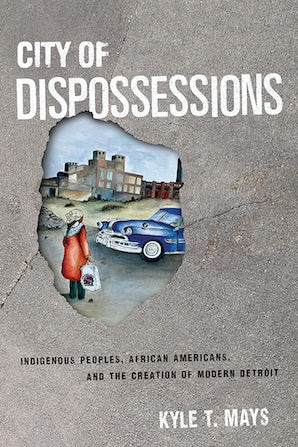 Indigenous Peoples, African Americans, and the Creation of Modern Detroit

In July 2013, Detroit became the largest city in U.S. history to declare bankruptcy. The underlying causes were decades of deindustrialization, white flight, and financial mismanagement. More recently it has been heralded a comeback city as wealthy white residents resettle there. Yet, as Kyle T. Mays argues, we cannot understand the current state of Detroit without also understanding the longer history of Native American and African American dispossession that has defined the city since its founding.

How has dispossession impacted the development of modern U.S. cities? And how does comparing the historical experiences of Native Americans and African Americans in an urban context help us comprehend histories of race, sovereignty, and colonialism? Using archives, oral and family histories, and community documents, City of Dispossessions is a cultural, intellectual, and social history that argues that physical and symbolic forms of dispossession of Native Americans and African Americans, and their reactions to dispossession, have been central to Detroit's modern development.

The book begins with the first settlement by the Frenchman Cadillac in 1701 and chronicles how the logic of dispossession has continued into the present, through a wide range of forms that include memorialization of the "disappearing Indian," the physical dispossession of African Americans through urban renewal, and gentrification. Mays also chronicles the wide-ranging forms of expression through which Black and Indigenous Detroiters have contested dispossession, such as the Red and Black Power movements and culturally relevant education.

Through lively, accessible prose as well as historical and contemporary examples, City of Dispossessions will be of interest to readers of urban studies, Indigenous Studies, and critical ethnic studies.