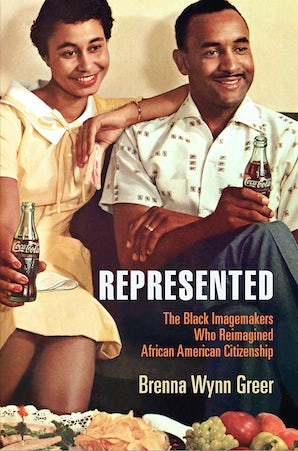 In 1948, Moss Kendrix, a former New Deal public relations officer, founded a highly successful, Washington, D.C.-based public relations firm, the flagship client of which was the Coca-Cola Company. As the first black pitchman for Coca-Cola, Kendrix found his way into the rarefied world of white corporate America. His personal phone book also included the names of countless black celebrities, such as bandleader Duke Ellington, singer-actress Pearl Bailey, and boxer Joe Louis, with whom he had built relationships in the course of developing marketing campaigns for his numerous federal and corporate clients. Kendrix, along with Ebony publisher John H. Johnson and Life photographer Gordon Parks, recognized that, in the image-saturated world of postwar America, media in all its forms held greater significance for defining American citizenship than ever before. For these imagemakers, the visual representation of African Americans as good citizens was good business.

In Represented, Brenna Wynn Greer explores how black entrepreneurs produced magazines, photographs, and advertising that forged a close association between blackness and Americanness. In particular, they popularized conceptions of African Americans as enthusiastic consumers, a status essential to postwar citizenship claims. But their media creations were complicated: subject to marketplace dictates, they often relied on gender, class, and family stereotypes. Demand for such representations came not only from corporate and government clients to fuel mass consumerism and attract support for national efforts, such as the fight against fascism, but also from African Americans who sought depictions of blackness to counter racist ideas that undermined their rights and their national belonging as citizens.

The story of how black capitalists made the market work for racial progress on their way to making money reminds us that the path to civil rights involved commercial endeavors as well as social and political activism.

"Greer's book tells the story of black civil-rights-era entrepreneurs who cajoled American corporations into catering to black people-for better or for worse. Her scholarship helps readers reframe the protest-centric narrative of the civil rights movement by teasing out how black capitalists' products and public relations campaigns leveraged major corporations like Standard Oil and Coca-Cola to support racial justice. However, far beyond the purview of voting rights and desegregation, this history also illuminates the origins of the racialized marketing that companies have employed to profiteer off black communities for generations."—The Nation

"Represented not only provides an important intervention in Black entrepreneurial history but also offers insights into how Black entrepreneurship and image creation aided in the reimagining of African American citizenship during the postwar struggle for civil rights . . . Greer uses an array of sources, but none more effectively than the advertising and marketing images displayed throughout the book. She uses these visual representations of Blackness to show how African Americans employed these images in their quest to market themselves as American citizens. At the core of the story of the African American struggle for freedom has been the quest for citizenship . . . A part of what Greer does masterfully in Represented is to challenge scholars to reconsider the fronts on which those battles have been fought."—The Journal of African American History

"Brenna Wynn Greer reveals how corporations and professional image-makers gave us some of our earliest photographic visions of freedom, showing how they captured, in the process, our most iconic snapshots of the black freedom struggle. Black capitalism and black activism have long been part of a single history. Represented now gifts us that history-timely and transformative-in a single, important book."—N. D. B. Connolly, author of A World More Concrete: Real Estate and the Remaking of Jim Crow South Florida

"Represented presents a powerful, critical, and wholly original analysis of the relationships between race, capital, and citizenship. Through a sophisticated and subtle reading of history, and a close examination of prominent black media makers, Brenna Wynn Greer offers an interpretation that rightly positions black people as shapers of American economy and postwar public culture. The book is a sorely needed contribution to the literature on black capitalism, media culture, and civil rights activism."—Marc Lamont Hill, author of Nobody: Casualties of America's War on the Vulnerable, from Ferguson to Flint and Beyond

"Beautifully written and meticulously researched, Represented is a groundbreaking, exemplary book that makes a field-defining intervention into the relationship between visual culture, capitalism, and citizenship."—Elspeth Brown, University of Toronto

"A wonderful and pioneering book that raises fresh questions about business, civil rights, and African American history. Complicating what it means to be a black capitalist, Brenna Wynn Greer charts a new path with her innovative framing of 'Civil Rights work.'"—Quincy Mills, Vassar College