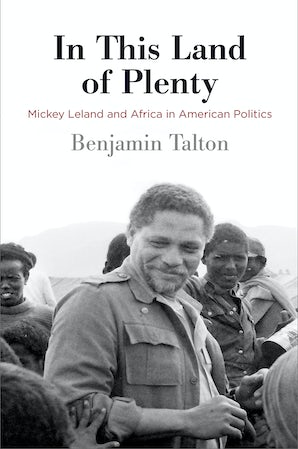 In This Land of Plenty

On August 7, 1989, Congressman Mickey Leland departed on a flight from Addis Ababa, with his thirteen-member delegation of Ethiopian and American relief workers and policy analysts, bound for Ethiopia's border with Sudan. This was Leland's seventh official humanitarian mission in his nearly decade-long drive to transform U.S. policies toward Africa to conform to his black internationalist vision of global cooperation, antiracism, and freedom from hunger. Leland's flight never arrived at its destination. The plane crashed, with no survivors.

When Leland embarked on that delegation, he was a forty-four-year-old, deeply charismatic, fiercely compassionate, black, radical American. He was also an elected Democratic representative of Houston's largely African American and Latino Eighteenth Congressional District. Above all, he was a self-proclaimed "citizen of humanity." Throughout the 1980s, Leland and a small group of former radical-activist African American colleagues inside and outside Congress exerted outsized influence to elevate Africa's significance in American foreign affairs and to move the United States from its Cold War orientation toward a foreign policy devoted to humanitarianism, antiracism, and moral leadership. Their internationalism defined a new era of black political engagement with Africa. In This Land of Plenty presents Leland as the embodiment of larger currents in African American politics at the end of the twentieth century. But a sober look at his aspirations shows the successes and shortcomings of domestic radicalism and aspirations of politically neutral humanitarianism during the 1980s, and the extent to which the decade was a major turning point in U.S. relations with the African continent.

Introduction
Chapter 1. "The Low Rising Against the High and Mighty": Radicalism and Protest in Addis Ababa and Houston
Chapter 2. Redefining Black Politics: The Third World Spirit and Black Internationalism in Congress
Chapter 3. "Horrendous Are the Hard Times": Western Food Aid and Ethiopia in the Age of Reagan
Chapter 4. Activists on the Inside: The Black Caucus Battles White Rule and U.S. Anticommunism in Southern Africa
Chapter 5. Ending Hunger in Africa: Humanitarianism Against Austerity
Chapter 6. "Flying in the Face of the Storm": Ethiopia, the United States, and the End of the Cold War
Conclusion. The Tragic Demise of Third World Politics in the United States