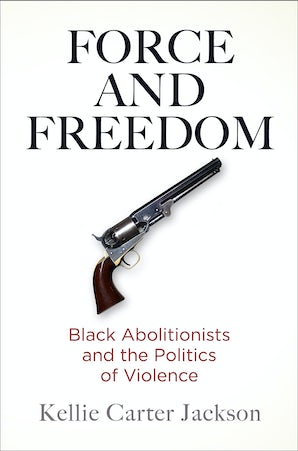 Black Abolitionists and the Politics of Violence

From its origins in the 1750s, the white-led American abolitionist movement adhered to principles of "moral suasion" and nonviolent resistance as both religious tenet and political strategy. But by the 1850s, the population of enslaved Americans had increased exponentially, and such legislative efforts as the Fugitive Slave Act and the Supreme Court's 1857 ruling in the Dred Scott case effectively voided any rights black Americans held as enslaved or free people. As conditions deteriorated for African Americans, black abolitionist leaders embraced violence as the only means of shocking Northerners out of their apathy and instigating an antislavery war.

In Force and Freedom, Kellie Carter Jackson provides the first historical analysis exclusively focused on the tactical use of violence among antebellum black activists. Through rousing public speeches, the bourgeoning black press, and the formation of militia groups, black abolitionist leaders mobilized their communities, compelled national action, and drew international attention. Drawing on the precedent and pathos of the American and Haitian Revolutions, African American abolitionists used violence as a political language and a means of provoking social change. Through tactical violence, argues Carter Jackson, black abolitionist leaders accomplished what white nonviolent abolitionists could not: creating the conditions that necessitated the Civil War. Force and Freedom takes readers beyond the honorable politics of moral suasion and the romanticism of the Underground Railroad and into an exploration of the agonizing decisions, strategies, and actions of the black abolitionists who, though lacking an official political voice, were nevertheless responsible for instigating monumental social and political change.

Introduction. The Philosophy of Force
Chapter 1. Forcing Freedom: The Limits of Moral Suasion
Chapter 2. Fight, Flight, and Fugitives: The Fugitive Slave Law and Violence
Chapter 3. From Prayers to Pistols: The Struggle for Progress
Chapter 4. Black Leadership: The Silenced Partners of Harpers Ferry
Chapter 5. A Carbonari Wanted: Violence, Emigration, and the Eve of the Civil War
Epilogue

"Force and Freedom provides a compelling intervention in studies of slavery, abolitionism, and allyship. Though many Americans envision abolitionism as a movement led by pacifistic white ministers, Carter Jackson's work overturns this limited conception of antislavery resistance. By centering black voices in this antebellum campaign, the author unveils the philosophical complexities that permeated the abolitionist movement."—The Journal of African American History

"With engaging new sources and a deft reading of familiar narratives, Kellie Carter Jackson reminds us that black resistance was always central to abolition. Force and Freedom centers the role of violence in the long road to black freedom, rendering a more complicated image of black abolitionists who were willing to abandon the petition for the gun. A most important contribution to the study of American abolition."—Erica Armstrong Dunbar, author of Never Caught: The Washingtons' Relentless Pursuit of Their Runaway Slave, Ona Judge

"In this original and important contribution to the history of abolitionism, Kellie Carter Jackson draws on newspapers, pamphlets, speeches, and convention proceedings to trace how black abolitionists abandoned Garrisonian 'moral suasion' and increasingly called for violent resistance to slavery. As she demonstrates, violence was both a political language and a concrete strategy, a means of galvanizing support in the North, drawing attention to the violence inherent in slavery, preventing the rendition of fugitive slaves, and paying tribute to the revolution that had overthrown the slave system in Haiti."—Eric Foner, author of Gateway to Freedom: The Hidden History of the Underground Railroad

"Kellie Carter Jackson reveals that revolutionary violence was a valuable weapon in the abolitionist arsenal, especially among African Americans. Black abolitionists, this book documents eloquently, were waging a war against slavery long before the booming of guns during the Civil War."—Manisha Sinha, author of The Slave's Cause: A History of Abolition