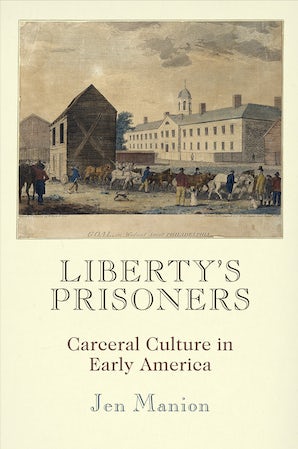 Liberty's Prisoners examines how changing attitudes about work, freedom, property, and family shaped the creation of the penitentiary system in the United States. The first penitentiary was founded in Philadelphia in 1790, a period of great optimism and turmoil in the Revolution's wake. Those who were previously dependents with no legal standing—women, enslaved people, and indentured servants—increasingly claimed their own right to life, liberty, and happiness. A diverse cast of women and men, including immigrants, African Americans, and the Irish and Anglo-American poor, struggled to make a living. Vagrancy laws were used to crack down on those who visibly challenged longstanding social hierarchies while criminal convictions carried severe sentences for even the most trivial property crimes.

The penitentiary was designed to reestablish order, both behind its walls and in society at large, but the promise of reformative incarceration failed from its earliest years. Within this system, women served a vital function, and Liberty's Prisoners is the first book to bring to life the e xperience of African American, immigrant, and poor white women imprisoned in early America. Always a minority of prisoners, women provided domestic labor within the institution and served as model inmates, more likely to submit to the authority of guards, inspectors, and reformers. White men, the primary targets of reformative incarceration, challenged authorities at every turn while African American men were increasingly segregated and denied access to reform.

Liberty's Prisoners chronicles how the penitentiary, though initially designed as an alternative to corporal punishment for the most egregious of offenders, quickly became a repository for those who attempted to lay claim to the new nation's promise of liberty.

"Jen Manion's Liberty's Prisoners powerfully recaptures the moment of transition between an older penal system based on public pain and shame and an emergent one centered on confinement, surveillance, and hidden humiliation. Focused on Philadelphia's famous Walnut Street Prison, Liberty's Prisoners demonstrates the human costs of the birth of the penitentiary."—William and Mary Quarterly

"Jen Manion's absorbing and important book adds many new layers to our understanding of the penitentiary system as it emerged in the early American republic. Manion shows the central roles played by gender and sexuality in the project of containing liberty through incarceration, as well as the close association between African Americans and criminality in this early phase of the prison system's history. Liberty's Prisoners reminds us how impossible it is to understand the history of freedom and its negation without placing gender, sex, and race at the center of that story."—Richard Godbeer, Virginia Commonwealth University

"By studying the lives of incarcerated African American, immigrant, and poor white women, Liberty's Prisoners describes the expansion of punishment and penal authority as a conscious effort to reassert social control in the Revolution's wake."—Mary Frances Berry, University of Pennsylvania

"Liberty's Prisoners is a very smart book, packed full of original insights and new perspectives. It makes significant contributions to a wide array of cutting-edge scholarly concerns in the history of the early American republic, crime and punishment in America, and the history of gender and sexuality."—Bruce Dorsey, Swarthmore College