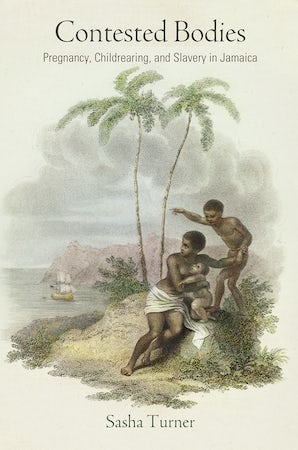 Pregnancy, Childrearing, and Slavery in Jamaica

It is often thought that slaveholders only began to show an interest in female slaves' reproductive health after the British government banned the importation of Africans into its West Indian colonies in 1807. However, as Sasha Turner shows in this illuminating study, for almost thirty years before the slave trade ended, Jamaican slaveholders and doctors adjusted slave women's labor, discipline, and health care to increase birth rates and ensure that infants lived to become adult workers. Although slaves' interests in healthy pregnancies and babies aligned with those of their masters, enslaved mothers, healers, family, and community members distrusted their owners' medicine and benevolence. Turner contends that the social bonds and cultural practices created around reproductive health care and childbirth challenged the economic purposes slaveholders gave to birthing and raising children.

Through powerful stories that place the reader on the ground in plantation-era Jamaica, Contested Bodies reveals enslaved women's contrasting ideas about maternity and raising children, which put them at odds not only with their owners but sometimes with abolitionists and enslaved men. Turner argues that, as the source of new labor, these women created rituals, customs, and relationships around pregnancy, childbirth, and childrearing that enabled them at times to dictate the nature and pace of their work as well as their value. Drawing on a wide range of sources—including plantation records, abolitionist treatises, legislative documents, slave narratives, runaway advertisements, proslavery literature, and planter correspondence—Contested Bodies yields a fresh account of how the end of the slave trade changed the bodily experiences of those still enslaved in Jamaica.

"Contested Bodies will be useful in graduate and undergraduate courses on slavery, women's history, diaspora studies, and the history of medicine. It is a must-read for those who want to know more about the intersection of gender and slavery."—Journal of American History

"Turner's sensitive and skillful reading of planter- and physician-authored accounts allows her to uncover fascinating details about the intimate domestic rituals and practices of enslaved women. She highlights the security and sense of community that their childbirth practices offered, with their comforting echoes of African and African-derived practices, and their social and educational roles."—American Historical Review

"Contested Bodies makes a vital contribution to studies on enslaved women as well as to the historiography on slavery and emancipation. Turner succeeds in centralizing the experiences of enslaved women and children, at the same time as she politicizes the meaning and significance of their responses to slavery reforms. Just as convincingly, she reveals that reproduction and the treatment and care of enslaved women and children were pivotal to the politics of slavery and abolition in Britain and Jamaica."—Gender and History

""Contested Bodies is a compelling, clearly written, and important book. Turner succeeds in showing how conflicts over reproduction and women's bodies were at the heart of some of the most important power struggles during the era of abolition-for the British Empire, for slaveowners, and for slaves themselves.''"—Slavery and Abolition

"Turner has given us a well-researched and interesting study which enriches our understanding of the history of enslaved people in the Caribbean, and reminds us that reproduction was at the heart of the abolitionist project for the British slave colonies."—Journal of Colonialism and Colonial History

"An original and timely intervention in the histories of slavery, gender, and labor. In arguing that reproduction played a crucial role across a number of political and social divides, Contested Bodies becomes an excellent window through which we can understand the economies (both moral and financial), culture, intimacies, protests, labor, and power in which the institution of slavery is imbricated."—Jennifer L. Morgan, New York University

"Contested Bodies is a path-breaking book, offering a new analysis of the impact of the end of the transatlantic slave trade on the actual persons of enslaved women and their children. It will become essential reading for those interested in the history of slavery, the history of women, and the history of the Atlantic."—Kathleen M. Brown, University of Pennsylvania

"Contested Bodies will be required reading for those who wish to understand the intimate workings of slavery in the Atlantic world. It draws on meticulous archival research to reveal the everyday practices of reproduction among enslaved women in Jamaica, including pregnancy, birth, and the care of infants. Sasha Turner shows how, in the later period of slavery, planters' efforts to increase the numbers of children born to enslaved women along with abolitionists' attention to the exploitation of women's reproductive capacity, politicised all aspects of enslaved women's reproductive lives. Turner's work reveals the significance of struggles over reproduction not just as an aspect of women's experiences of slavery, but also as contests at the heart of the system of slavery as a whole."—Diana Paton, University of Edinburgh