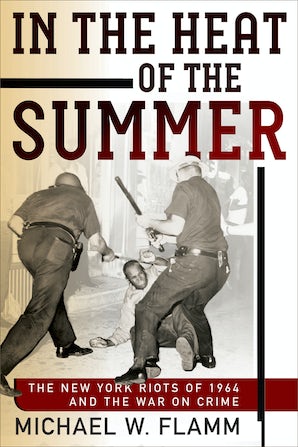 In the Heat of the Summer

The New York Riots of 1964 and the War on Crime

On the morning of July 16, 1964, a white police officer in New York City shot and killed a black teenager, James Powell, across the street from the high school where he was attending summer classes. Two nights later, a peaceful demonstration in Central Harlem degenerated into violent protests. During the next week, thousands of rioters looted stores from Brooklyn to Rochester and pelted police with bottles and rocks. In the symbolic and historic heart of black America, the Harlem Riot of 1964, as most called it, highlighted a new dynamic in the racial politics of the nation. The first "long, hot summer" of the Sixties had arrived.

In this gripping narrative of a pivotal moment, Michael W. Flamm draws on personal interviews and delves into the archives to move briskly from the streets of New York, where black activists like Bayard Rustin tried in vain to restore peace, to the corridors of the White House, where President Lyndon Johnson struggled to contain the fallout from the crisis and defeat Republican challenger Barry Goldwater, who had made "crime in the streets" a centerpiece of his campaign. Recognizing the threat to his political future and the fragile alliance of black and white liberals, Johnson promised that the War on Poverty would address the "root causes" of urban disorder. A year later, he also launched the War on Crime, which widened the federal role in law enforcement and set the stage for the War on Drugs.

Today James Powell is forgotten amid the impassioned debates over the militarization of policing and the harmful impact of mass incarceration on minority communities. But his death was a catalyst for the riots in New York, which in turn foreshadowed future explosions and influenced the political climate for the crime and drug policies of recent decades. In the Heat of the Summer spotlights the extraordinary drama of a single week when peaceful protests and violent unrest intersected, the freedom struggle reached a crossroads, and the politics of law and order led to demands for a War on Crime.

Prologue
Chapter 1. The Growing Menace
Chapter 2. The Great Mecca
Chapter 3. The Gathering Storm
Chapter 4. The Fire This Time
Chapter 5. This Most Marvelous City
Chapter 6. Heat and Dirt, Anger and Fury
Chapter 7. Take the "A" Train
Chapter 8. Communists, Conservatives, and Conspiracies
Chapter 9. Make Somebody Listen
Chapter 10. Calming the Waters
Chapter 11. All the Way with LBJ
Chapter 12. The War on Crime
Epilogue

"Flamm's treatment of the riots is riveting. . . . Scouring government records, press reports, and the papers of public officials and civil rights organizations, Flamm also interviewed surviving participants, including police officers and residents of Harlem and Brooklyn. He thus provides a street-level feel for the events of that feverish time. The result is a much more detailed and textured treatment than previous accounts provide. . . . In the Heat of the Summer . . . provides a long-overdue chronicle of that fateful summer and helps us understand a pivotal moment in the tangled history of race and politics in the 1960s."—American Historical Review

"[T]his book is a must read . . . well researched and very accessible . . . Flamm provides a gripping and solid account of a previously neglected but important chapter in United States history."—New York History

"Michael Flamm has written a searing account of the 1964 New York City riots, the first of the many violent uprisings that galvanized the United States in the 1960s. Flamm's riveting history of black anger, police misconduct, and the politics of law and order sets the stage for today's debates over incarceration, police-community relations, and the struggle for racial justice in the United States."—David Farber, University of Kansas

"This moving and insightful book takes us back to the fateful summer of 1964 when law and order moved to the center of political discourse. It tells the story of the Harlem riot or uprising from the viewpoint of all participants with verve, empathy and grace."—Laura Kalman, University of California, Santa Barbara

"In the Heat of the Summer is not simply the best history ever written about race and urban violence in the 1960s. It brilliantly reveals the roots of the ongoing mistrust between police and African-Americans. And Michael Flamm's vivid narrative is hard to put down."—Michael Kazin, author of War Against War: The American Fight for Peace, 1914-1918

"Until now, the 1964 Harlem Riot has not been properly fixed in American and literary lore. Michael Flamm's riveting retelling of the saga-against the backdrop of a single black teenage death and replete with the journalists, politicians, and activists who were there-fills the missing gap in a work that is necessary, and unbelievably timely."—Wil Haygood, author of Showdown: Thurgood Marshall and the Supreme Court Nomination That Changed America

"Michael Flamm's important book gives us the first detailed look at the event that ignited the long, hot summers of the 1960s. Flamm provides us with rich portraits of the politicians, officers, community leaders, and hard-working people in the neighborhoods who were affected by the riots. This remarkable book brilliantly tackles the tangled nexus of race and criminal justice that is at the core of this history and continues to be its legacy."—Alan Brinkley, author of The Publisher: Henry Luce and His American Century