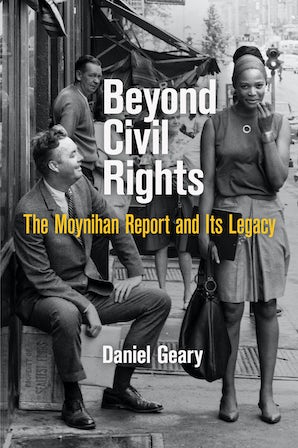 The Moynihan Report and Its Legacy

Shortly after the 1964 Civil Rights Act, Daniel Patrick Moynihan authored a government report titled The Negro Family: A Case for National Action that captured the attention of President Lyndon Johnson. Responding to the demands of African American activists that the United States go beyond civil rights to secure economic justice, Moynihan thought his analysis of black families highlighted socioeconomic inequality. However, the report's central argument that poor families headed by single mothers inhibited African American progress touched off a heated controversy. The long-running dispute over Moynihan's conclusions changed how Americans talk about race, the family, and poverty.

Fifty years after its publication, the Moynihan Report remains a touchstone in contemporary racial politics, cited by President Barack Obama and Congressman Paul Ryan among others. Beyond Civil Rights offers the definitive history of the Moynihan Report controversy. Focusing on competing interpretations of the report from the mid-1960s to the late 1970s, Geary demonstrates its significance for liberals, conservatives, neoconservatives, civil rights leaders, Black Power activists, and feminists. He also illustrates the pitfalls of discussing racial inequality primarily in terms of family structure. Beyond Civil Rights captures a watershed moment in American history that reveals the roots of current political divisions and the stakes of a public debate that has extended for decades.

"The Moynihan Report is well-trodden historical ground, but Geary offers the most extensive and nuanced discussion to date of its intellectual, social, and political context and of its significant historical impact."—American Historical Review

"A concise, lucid, and wonderfully readable account. With remarkable acuity and grace, Beyond Civil Rights provides an utterly persuasive history of both the Moynihan Report and the ongoing argument about it."—Howard Brick, University of Michigan

"Daniel Geary provides a fresh portrait and insightful analysis of Daniel Patrick Moynihan during his heyday, and a nuanced framework for assessing the famous report and its wide-ranging impact-and more. Beyond Civil Rights is a path-breaking study of the limits of liberalism during a time of racial crisis and transformation."—Patricia Sullivan, University of South Carolina

"Written with an easy grace and accessibility, Beyond Civil Rights enriches our understanding of race politics, myth-making, and rhetorical brinksmanship over the last fifty years. Sophisticated and immensely enjoyable."—Jonathan Holloway, Yale University