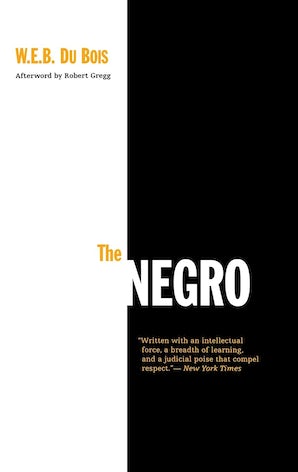 Africa is at once the most romantic and the most tragic of continents. So begins The Negro, the first comprehensive history of African and African-derived people, from their early cultures through the period of the slave trade and into the twentieth century.

Originally published in 1915, the book was acclaimed in its time, widely read, and deeply influential in both the white and black communities, yet this beautifully written history is virtually unknown today. As a wellspring of critical studies of Africa and African Americans, it directly and indirectly influenced and inspired the works of scholars such as C. L. R. James, Eric Williams, Herbert Aptheker, Eric Foner, Kwame Anthony Appiah, and Henry Louis Gates, Jr. One of the most important books on Africa ever written, it remains fresh, dynamic, and insightful to this day.

The Negro is compelling on many levels. By comparing W. E. B. Du Bois's analysis with subsequent scholarship, Robert Gregg demonstrates in his afterword that The Negro was well ahead of its time: Du Bois's view of slavery prefigures both paternalistic perspectives and the materialist view that the system was part of the capitalist mode of production. On black contributions to the Civil War and to the emancipation of slaves, historians have yet to acknowledge all that Du Bois delineated. In his discussion of Reconstruction, Du Bois preempts much later historiography. His identification of segregation as an issue of class rather than race is almost forty years ahead of C. Vann Woodward's similar thesis. As to the matter of race, Du Bois is clear that the concept is a social construct having no foundation in biology.

Intellectually and historically prescient, Du Bois assumed globalization as a matter of course, so that his definition of the color line in The Negro links all colonized peoples, not just people of African descent. With the resolution of the Cold War and the ascendancy of the global market, Du Bois's sweeping vision of Africans and the diaspora seems more relevant now than at any time in the past hundred years.

"The book ought to be generally read, for it contains more than mere information. It gathers and sets forth authentic data which form the kind of historic background essential to race consciousness."—James Weldon Johnson

"The whole is written with an intellectual force, a breadth of learning, and a judicial poise that compel respect."—New York Times