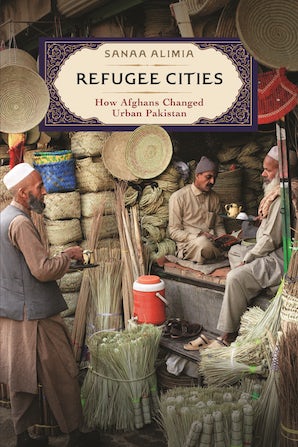 Situated between the 1970s Soviet Union’s invasion of Afghanistan and the post–2001 War on Terror, Refugee Cities tells the story of how global wars affect everyday life for Afghans who have been living as refugees in Pakistan. This book provides a necessary glimpse of what ordinary life looks like for a long-term refugee population, beyond the headlines of war, terror, or helpless suffering. It also increases our understanding of how cities—rather than the nation—are important sites of identity-making for people of migrant origins.

In Refugee Cities, Sanaa Alimia reconstructs local microhistories to chronicle the lives of ordinary people living in low-income neighborhoods in Peshawar and Karachi and the ways in which they have transformed the cities of which they are a part. In Pakistan, formal citizenship is almost impossible for Afghans to access; despite this, Afghans have made new neighborhoods, expanded city boundaries, built cities through their labor in construction projects, and created new urban identities—and often they have done so alongside Pakistanis. Their struggles are a crucial, neglected dimension of Pakistan’s urban history. Yet given that the Afghan experience in Pakistan is profoundly shaped by geopolitics, the book also documents how, in the War-on-Terror era, many Afghans have been forced to leave Pakistan. This book, then, is also a documentation of the multiple displacements migrants are subject to and the increased normalization of deportation as a part of “refugee management.”

"Refugee Cities is a micro-history and narrative of lived experiences of Afghan refugees and Pakistani citizens alike. The book covers the struggles of these people in place-making in urban Pakistan and will be of great interest to anyone who wishes to know more about informal settlements and the urban and national politics of the Pakistani state in dealing with the poor and the non-citizens."—Dawn