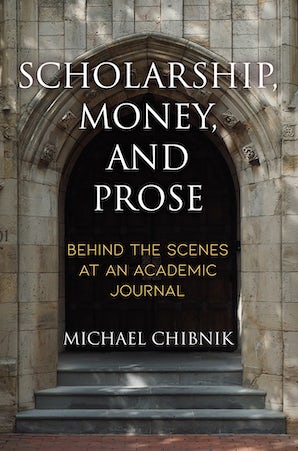 Behind the Scenes at an Academic Journal

American Anthropologist is the flagship journal of the American Anthropological Association, published quarterly, reaching more than 12,000 readers with each issue and representing four distinct subfields. The journal publishes articles that add to, integrate, synthesize, and interpret anthropological knowledge; commentaries and essays on issues of importance to the discipline; and reviews of books, films, sound recordings, and exhibits. From 2012 to 2016, Michael Chibnik was editor-in-chief of American Anthropologist. In Scholarship, Money, and Prose, he writes a candid account of the complex and challenging work entailed in its production.

Providing detailed ethnographic and historical descriptions of the operations of a major journal and behind-the-scenes anecdotes of his experiences, Chibnik makes transparent the work of an editor-in-chief. He reveals how he assembled diverse materials, assessed contradictory peer reviews of manuscripts submitted for publication, and collaborated with authors to improve the legibility and clarity of their articles. He also examines controversies that emerged from his columns on open access and biological anthropology and the inclusion of politically charged material in the journal.

Scholarship, Money, and Prose sheds light on two aspects of successful editing that are common to academic journals whatever their subject matter. The first task is to strike a balance among different theoretical perspectives and topical specialties. This pressure is particularly salient in a field like anthropology in which scholars differ greatly in the extent to which they adopt a scientific or humanistic perspective. Second, editors must attend carefully to the need to keep costs down and revenues up in an economic environment in which libraries are cutting subscriptions and publishers are considering the future sustainability of journals. Relevant to a wide range of disciplines, Scholarship, Money, and Prose serves as a window onto the past, present, and future of scholarly publishing.

"[A] great short book by Michael Chibnik, recounting his time as editor of American Anthropologist. It's an approachable and well-organized explanation of how a big academic journal works, the kind of practical guide we need more of in higher education."—Higher Education Strategy

There is much to be gleaned from this deceptively straight-forward account—which, as Michael Chibnik notes, is part
memoir and part ethnography—of what goes on behind the scenes to produce American Anthropologist, the ﬂagship journal of the American Anthropological Association. Drawing on his experience as the journal’s editor-in-chief and on his expertise in the anthropology of work, Chibnik emphasizes enduring themes and trends because he wants his book to serve as a usefully representative example of what it is like to produce any academic journal.

"Scholarship, Money, and Prose is an engaging and informative narrative that conveys the sense of the job of an editor and its pivotal role in the production and circulation of scholarly work. Original and distinctive, the book is a singular exploration of an editorial career."—Donald Brenneis, University of California, Santa Cruz

"Michael Chibnik presents a provocative first-hand account of the ways and means by which, as editor of a flagship journal, he navigated the sometimes turbulent crosscurrents between his commitment to disciplinary coherence and the pragmatics of running the journal as a revenue-generating operation for a non-profit membership organization."—Carol J. Greenhouse, Princeton University