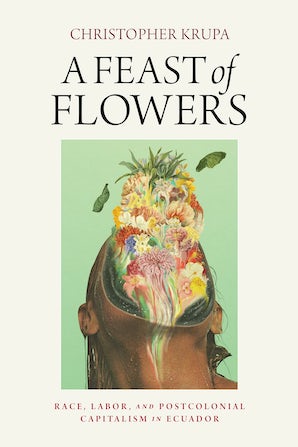 A Feast of Flowers

When Ecuador's cut-flower industry took off in the mid-1980s, it rode a wave of international credit peddling and currency speculation that would lead countries of the Global South into successive debt crises and northern financial firms to fortune and dominion. By the start of the twenty-first century, as the Ecuadorian economy collapsed and its ties with international finance became strained, flower exporters rebuilt their businesses around the profitability of their indigenous labor force, drawing local communities deeply into new plantation systems taking over the highlands.

In A Feast of Flowers, Christopher Krupa goes inside Ecuador's booming cut-flower industry to chronicle the ways its capitalist pioneers built a booming export industry around a racial ideology, turning indigenous people's purported differences into resources for industrial expansion. At the core of this racial system is a belief, central to postcolonial science and politics in Ecuador, in capitalism's unique capacity to change people's racial identity and to liberate oppressed populations from racial subordination. Krupa shows how such views not only guide how indigenous people are today incorporated into demanding labor systems in Ecuador's new export plantations, but also how indigenous minds and bodies became sites of study and intervention by scientists, politicians, and economic planners throughout the last century, all looking to change indigenous people in some way.

Combining nearly two decades of ethnographic and historical research, A Feast of Flowers shows how aggressive capitalist expansion in postcolonial contexts may revive longstanding intersections between race and economy to facilitate new modes of dispossession under the guise of humanitarian intervention.

"A Feast of Flowers is a fascinating exploration of the inner workings of agro-industrial spaces, providing a compelling case study for how to approach the hidden histories behind everyday commodities. The importance of Krupa’s timely ethnographic approach lies in its careful dissection of boom-time capitalism and the complex links between race relations, regional history, and subjectivity. This book will supplement conversations across anthropology, geography, economics, and Latin American studies, as it poses important questions for those interested in industrial-labor conditions and transnational commodity networks and, for that matter, anyone who has ever purchased or received cut flowers."—Exertions

"This brilliant, powerful study is a pioneering ethnography of capitalist production and its long history of degrading lives through racializing structures of inequity. Krupa’s genius is to focus on the chain of intertwining relations, spanning continents and industries, organizational forms and systemic structures, politics and world views that are involved in the production of delicacies prized in North America and made through the labor of Ecuadorian peasants. Because of his innovative work, we come to understand the weight and trajectory of these transformations making Indigenous, subsistence farmers into ‘modern’ workers for a burgeoning, North American flower industry. Krupa’s insights, compelling prose, personal commentaries—and wit—make us take account of our roles in these histories and realize how we are also accomplices in producing chains of inequity. After reading this book, we will never look at roses the same way."—Irene Silverblatt, Duke University