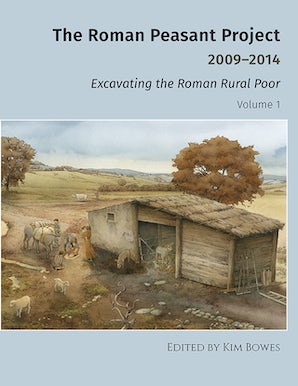 This book presents the results of the first systematic archaeological study of Roman peasants. It examines the spaces, architecture, diet, agriculture, market interactions, and movement habitus of non-elite rural dwellers in a region of southern Tuscany, Italy, during the Roman period. Volume 1 presents the excavation data from eight non-elite rural sites including a farm, a peasant house, animal stall/work huts, a ceramics factory, field drains, and a site of uncertain function, here framed as individual chapters complete with finds analysis. Volume 2 examines this data synthetically in thematic chapters addressing land use, agriculture, diet, markets, and movement.

The results suggest a different, more sophisticated Roman peasant than heretofore assumed. The data suggests that Roman peasants particularly in the first century BC/AD built specialized sites distributed throughout the landscape to maximize use of diverse land parcels. This has important implications for the interpretation of field survey data, the estimate of rural demographics from that survey, and assumptions about the long-term changes to human settlement. It also points to an important moment of agricultural intensification in this period, a contention beginning to be supported by other studies. The project also identified sophisticated systems of land use, including crop rotation and an important investment in animal agriculture. This work presents the first systematic data from Roman Italy for rural consumption, tracking the fine wares made at a production site to local sites nearby. This supports the largely theoretical problematizing of the so-called consumer city model and suggests the potential importance of rural aggregate demand. Movement studies, based on finds from the sites themselves, describe a more mobile population than anticipated, engaged in quotidian and long-distance movement patterns, supported by the small but steady stream of imports and exports into and out of this seemingly liminal region. The book concludes by addressing the implications of this new data for major questions in Roman social and economic history.

"This volume is the rich and complex publication of an even richer and more complex project...The Roman Peasant Project shows just how far archaeological evidence can be pushed, especially in collaboration with archaeological scientists, and how much farther it goes when all the separate strands of evidence are combined, and considered together, rather than occupying catalogues at the end of a volume. The work is a milestone in the history of Roman agriculture in Italy."—Bryn Mawr Classical Review