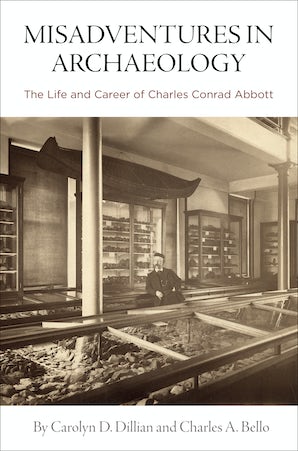 The Life and Career of Charles Conrad Abbott

In the late nineteenth century, Charles Conrad Abbott, a medical doctor and self-taught archaeologist, gained notoriety for his theories on early humans. He believed in an American Paleolithic, represented by an early Ice Age occupation of the New World that paralleled that of Europe, a popular scientific topic at the time. He attempted to prove that the Trenton gravels—glacial outwash deposits near the Delaware River—contained evidence of an early, primitive population that pre-dated Native Americans. His theories were ultimately overturned in acrimonious public debate with government scientists, most notably William Henry Holmes of the Smithsonian Institution. His experience—and the rise and fall of his scientific reputation—paralleled a major shift in the field toward an increasing professionalization of archaeology (and science as a whole).

This is the first biography of Charles Conrad Abbott to address his archaeological research beyond the Paleolithic debate, including his early attempts at historical archaeology on Burlington Island in the Delaware River, and prehistoric Middle Woodland collections made throughout his lifetime at Three Beeches in New Jersey, now the Abbott Farm National Historic Landmark. It also delves into his modestly successful career as a nature writer. As an archaeologist, he held a position with the Peabody Museum at Harvard University and was the first curator of the American Section at the Penn Museum. He also attempted to create a museum of American archaeology at Princeton University. Through various sources including archival letters and diaries, this book provides the most complete picture of the quirky and curmudgeonly, C. C. Abbott.