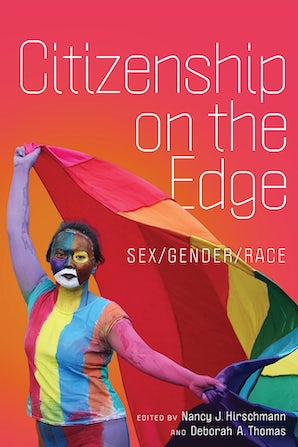 Citizenship on the Edge

What does it mean to claim, two decades into the twenty-first century, that citizenship is on the edge? The questions that animate this volume focus attention on the relationships between liberal conceptions of citizenship and democracy on one hand, and sex, race, and gender on the other. Who "counts" as a citizen in today's world, and what are the mechanisms through which the rights, benefits, and protections of liberal citizenship are differentially bestowed upon diverse groups? What are the relationships between global economic processes and political and legal empowerment? What forms of violence emerge in order to defend and define these rights, benefits, and protections, and how do these forms of violence reflect long histories? How might we recognize and account for the various avenues through which people attempt to make themselves as political subjects?

Citizenship on the Edge approaches these questions from multiple disciplines, including Africana Studies, anthropology, disability studies, film studies, gender studies, history, law, political science, and sociology. Contributors explore the ways in which compounding social inequalities redound to the conditions and expressions of citizenship in the U.S. and throughout the world. They give a sense of the breathtaking range of the ways that citizenship is controlled, repressed, undercut, and denied at the same time as they outline people's attempts to claim citizenship in ways that are meaningful to them. From university speech policies, to labor and immigration policies, to a rethinking of the security theatre, to women's empowerment in the family and economy and a rethinking of marriage and the family, we see slivers of possibility for a more inclusive and less hostile world, in which citizenship is no longer so in doubt, so on the edge, for so many. As a whole, the volume argues that citizenship cannot be conceptualized as a transcendent good but must instead always be contextualized within specific places and times, and in relation to dynamic struggle.

Introduction. Citizenship on the Edge: Sex/Gender/Race
Deborah A. Thomas and Nancy J. Hirschmann

Chapter 6. From Anomaly to Alarm: Trans and Crip Bodies in the Security State
Ellen Samuels

Chapter 7. It's Blue and It's Up to You! Examining Federal Antitrafficking Awareness Campaigns in the United States
Samantha Majic

Afterword. Citizenship on the Edge in the Age of COVID
Nancy J. Hirschmann

"Editors Nancy J. Hirschmann and Deborah A Thomas in Citizenship on the Edge open the door to discussions that go beyond the assumptions of citizenship rights to explain how singular and compounding social inequalities make citizenship unstable and precarious around the world. This comprehensive, multidisciplinary volume breaks down the complex relationship between sex, gender and race, and the liberal conception of citizenship and democracy. Contributors from a plethora of perspectives reveal the harsh truth of obtaining and maintaining citizenship within the social, economic, and political realms while confronting negative societal backlash."—Ethnic and Racial Studies