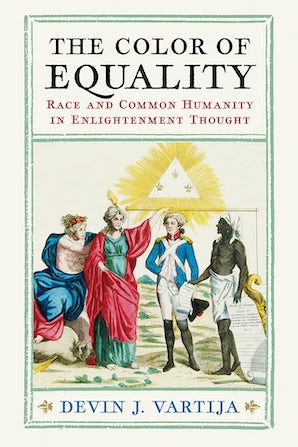 The Color of Equality

The Enlightenment is often either praised as the wellspring of modern egalitarianism or condemned as the cradle of scientific racism. How should we make sense of this paradox? The Color of Equality is the first book to investigate both the inclusive language of common humanity and the hierarchical language of race in Enlightenment thought, seeking to understand how eighteenth-century thinkers themselves made sense of these tensions. Using three major Enlightenment encyclopedias from England, France, and Switzerland, the book provides a rich contextualization of the conflicting ideas of equality and race in eighteenth-century thought.

Enlightenment thinkers used physical features to categorize humanity into novel "racial" groups in a discourse that was imbued with Eurocentric aesthetic and moral judgments. Simultaneously, however, these very same thinkers politicized equality by putting it to new uses, such as a vitriolic denunciation of slavery and inhumane treatment that was grounded in the nascent philosophy of human rights. Vartija contends that the tension between Enlightenment ideas of race and equality can best be explained by these thinkers' attempt to provide a naturalistic account of humanity, including both our physical and moral attributes. Enlightenment racial classification fits into the novel inclusion of humanity in histories of nature, while the search for the origins of morality in social experience alone lent equality a normative authority it had not previously possessed.

Eschewing straightforward approbation or blame of the Enlightenment, The Color of Equality demonstrates that our present-day thinking about human physical and cultural diversity continues to be deeply informed by an eighteenth-century European intellectual revolution with global ramifications.

"It is hard to imagine a more timely and significant book. In this compelling study, Devin J. Vartija not only unpacks the complex history of race as a category but also shows its sometimes surprising connection to equality in a century that was crucial to the articulation of both. As a consequence, our modern challenges become more comprehensible and, we can hope, all the more surmountable."—Lynn Hunt, author of Inventing Human Rights: A History