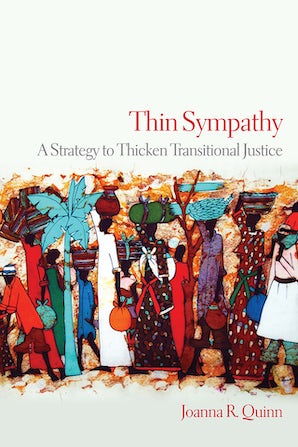 A Strategy to Thicken Transitional Justice

Transitional justice, commonly defined as the process of confronting the legacies of past human rights abuses and atrocities, often does not produce the kinds of results that are imagined. In multiethnic, divided societies like Uganda, people who have not been directly affected by harm, atrocity, and abuse go about their daily lives without ever confronting what happened in the past. When victims and survivors raise their voices to ask for help, or when plans are announced to address that harm, it is this unaffected population that see such plans as pointless. They complain about what they perceive as the "needless" time and money that will be spent to fix something that they see as unimportant and, ultimately, block any restorative processes.

Joanna R. Quinn spent twenty years working in Uganda and uses its particular case as a lens through which she examines the failure of deeply divided societies to acknowledge the past. She proposes that the needed remedy is the development of a very rudimentary understanding—what she calls "thin sympathy"—among individuals in each of the different factions and groups of the other's suffering prior to establishing any transitional justice process. Based on 440 extensive interviews with elites and other thought leaders in government, traditional institutions, faith groups, and NGOs, as well as with women and children throughout the country, Thin Sympathy argues that the acquisition of a basic understanding of what has taken place in the past will enable the development of a more durable transitional justice process.

"[T]he book invites us to rethink the entire transitional justice project from the 1990s onwards...[and delivers a] powerful message: the fact that ordinary bystanders can open their minds to acknowledge the suffering of others is at the foundation of a peaceful society. Better yet, building bridges can take place anytime, anywhere; all it takes is willpower and something—an idea, object, event, conversation—that connects people. Thin Sympathy will prompt novel ways of thinking about and acting for truth, justice, peace and reconciliation."—Contemporary Political Theory