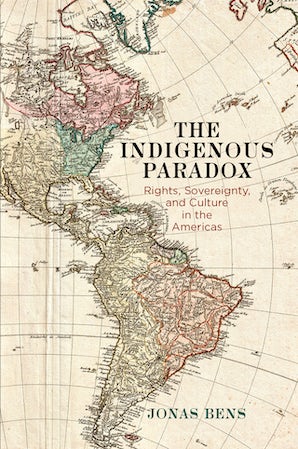 Rights, Sovereignty, and Culture in the Americas

In the twenty-first century, it is politically and legally commonplace that indigenous communities go to court to assert their rights against the postcolonial nation-state in which they reside. But upon closer examination, this constellation is far from straightforward. Indigenous communities make their claims as independent entities, governed by their own laws. And yet, they bring a case before the court of another sovereign, subjecting themselves to its foreign rule of law.

According to Jonas Bens, when native communities enter into legal relationships with postcolonial nation-states, they "become indigenous." Indigenous communities define themselves as separated from the settler nation-state and insist that their rights originate from within their own system of laws. At the same time, indigenous communities must argue that they are incorporated in the settler nation-state to be able to use its judiciary to enforce these rights. As such, they are simultaneously included into and excluded from the state.

Tracing how the indigenous paradox is inscribed into the law by investigating several indigenous rights cases in the Americas, from the early nineteenth century to the early twenty-first, Bens illustrates how indigenous communities have managed—and continue to manage—to navigate this paradox by developing lines of legal reasoning that mobilize the concepts of sovereignty and culture. Bens argues that understanding indigeneity as a paradoxical formation sheds light on pressing questions concerning the role of legal pluralism and shared sovereignty in contemporary multicultural societies.

"Jonas Bens’ ambitious book...explores the political impact of state recognition for indigenous and tribal peoples enacting indigenous rights claims...As a contribution to scholarship examining local and international human rights systems, the book makes a strong argument for a comparative ethnographic approach to legal texts in showing how indigeneity is both emergent within and constructed against national and international legal systems."—The New Rambler

"For legal historians interested in an overall vision of indigenous rights in the Americas, this is an indispensable work because it questions current paradigms—both the strict division between North and South America as well as the supposed authenticity and ancestry that is often attributed to rights historically subject to what Bens calls the indigenous paradox. For this reason, it is a recommendable book for ethnohistorians, anthropologists and Americanists dedicated to the study of the problems of native peoples. For sure, it is a work that contributes to the attempts to decolonize history and law because such attempts are likewise subject to the indigenous paradox the author describes…This is an original book, very well written and researched."—Rechtsgeschichte / Legal History

"Through an anthropological reading of landmark indigenous rights cases in the Americas, Jonas Bens illuminates central features of indigenous identity and clarifies central contradictions of indigenous political engagement, providing a sense of what is at stake regarding aboriginal rights today."—David Dinwoodie, University of New Mexico