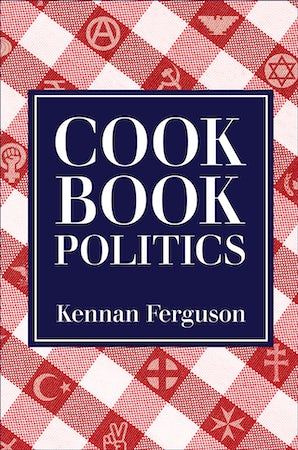 An original and eclectic view of cookbooks as political acts

Cookbooks are not political in conventional ways. They neither proclaim, as do manifestos, nor do they forbid, as do laws. They do not command agreement, as do arguments, and their stipulations often lack specificity — cook "until browned." Yet, as repositories of human taste, cookbooks transmit specific blends of flavor, texture, and nutrition across space and time. Cookbooks both form and reflect who we are. In Cookbook Politics, Kennan Ferguson explores the sensual and political implications of these repositories, demonstrating how they create nations, establish ideologies, shape international relations, and structure communities.

Cookbook Politics argues that cookbooks highlight aspects of our lives we rarely recognize as political—taste, production, domesticity, collectivity, and imagination—and considers the ways in which cookbooks have or do politics, from the most overt to the most subtle. Cookbooks turn regional diversity into national unity, as Pellegrino Artusi's Science in the Kitchen and the Art of Eating Well did for Italy in 1891. Politically affiliated organizations compile and sell cookbooks—for example, the early United Nations published The World's Favorite Recipes. From the First Baptist Church of Midland, Tennessee's community cookbook, to Julia Child's Mastering the Art of French Cooking, to the Italian Futurists' proto-fascist guide to food preparation, Ferguson demonstrates how cookbooks mark desires and reveal social commitments: your table becomes a representation of who you are.

Authoritative, yet flexible; collective, yet individualized; cooperative, yet personal—cookbooks invite participation, editing, and transformation. Created to convey flavor and taste across generations, communities, and nations, they enact the continuities and changes of social lives. Their functioning in the name of creativity and preparation—with readers happily consuming them in similar ways—makes cookbooks an exemplary model for democratic politics.

"Ferguson is interested not only in the ways in which cookbooks formalize, organize, and codify the political, but also in how cookbooks are 'archives of taste.' To explore this connection, he uses exemplary cases—either single books or book types—to think about the political nature and effects of taste...Cookbook Politicsoffers a unique perspective and makes an important contribution as an invitation to rethink the location of politics: on the political stage, in our kitchens, in our imaginations, or through our mouths and into our stomachs."—American Studies

"Are cookbooks political? Of course they are. But Cookbook Politics does much more than link recipes to the production of national identity or the division of household labor. Exploring cookbooks as models of authority and instruction, focusing on the practices of both reading and cooking, this deft book articulates a politics of food operating at the level of sensation and convincingly argues that a vital politics, like the best cooking, requires a healthy measure of creativity."—Chad Lavin, author of Eating Anxiety: The Perils of Food Politics

"Cookbook Politics convincingly demonstrates how cookbooks share and shape political life through the complex phenomena associated with eating. It is a major intervention in arguments concerning the politics of taste."—Thomas Dumm, author of Home in America: On Loss and Retrieval