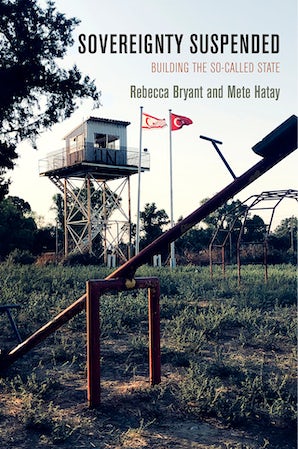 What is de facto about the de facto state? In Sovereignty Suspended, this question guides Rebecca Bryant and Mete Hatay through a journey into de facto state-building, or the process of constructing an entity that looks like a state and acts like a state but that much of the world says does not or should not exist. In international law, the de facto state is one that exists in reality but remains unrecognized by other states. Nevertheless, such entities provide health care and social security, issue identity cards and passports, and interact with international aid donors. De facto states hold elections, conduct censuses, control borders, and enact fiscal policies. Indeed, most maintain representative offices in sovereign states and are able to unofficially communicate with officials. Bryant and Hatay develop the concept of the "aporetic state" to describe such entities, which project stateness and so seem real, even as nonrecognition renders them unrealizable.

Sovereignty Suspended is based on more than two decades of ethnographic and archival research in one so-called aporetic state, the Turkish Republic of Northern Cyprus (TRNC). It traces the process by which the island's "north" began to emerge as a tangible, separate, if unrecognized space following violent partition in 1974. Like other de facto states, the TRNC looks and acts like a state, appearing real to observers despite international condemnations, denials of its existence, and the belief of large numbers of its citizens that it will never be a "real" state. Bryant and Hatay excavate the contradictions and paradoxes of life in an aporetic state, arguing that it is only by rethinking the concept of the de facto state as a realm of practice that we will be able to understand the longevity of such states and what it means to live in them.

Part I. The Border That Is Not One
Chapter 1. Building a "Border"
Chapter 2. Mastering the Landscape
Chapter 3. Planting People

Part III. The Aporetic Subject
Chapter 7. Victim and Citizen
Chapter 8. The Ambiguities of Domination
Chapter 9. The Politics of Dis/simulation

Conclusion. The Absurdity of the Aporia

Sovereignty Suspended is a treat. Organizing their analysis around concerns with perceptions and (in)visibility, with recognition and (non-)naming, and with agency and modes of getting by, Rebecca Bryant and Mete Hatay have prepared two gifts for us: a riveting historical ethnography of the Turkish Cypriot sovereignty project, now embodied in the
Turkish Republic of Northern Cyprus (TRNC), and a sophisticated analytical toolbox to think through questions of sovereignty well beyond this ‘de facto’ state. What is particularly impressive is that those two contributions are developed in close interaction, giving the lie to the stereotypical division of labour between authors whose contribution is said to be ‘theoretical’ or ‘regional’ respectively...[R]ead Sovereignty Suspended. This is a big book: big on empirical insight, big on conceptualization...very big on inspiration. It’s big on volume too, and worth every page of it.

"In a world in which such ambivalent, state-like entities seem to have proliferated, the case of northern Cyprus offers many useful lessons for understanding what statehood actually does-lessons that the authors of this insightful and original book artfully extract from a wonderful array of personal experience, documentary evidence, and ethnographic observation."—Michael Herzfeld, Harvard University

"Sovereignty Suspended is an absolute joy to read and easily one of the best books written on de facto states. Rebecca Bryant and Mete Hatay use their extensive knowledge and years of research on the Turkish Republic of Northern Cyprus to provide an extremely rich and original analysis of the processes of de facto state-building: how state-builders tried to make Turkish Cypriots perceptible and recognizable to the world, how this has resulted in a state that seems made up, and the resilient tactics that Turkish Cypriots have developed to go on with their lives. But Bryant and Hatay are not simply interested in state-building in de facto states, and their analysis allows them to reconceptualize sovereignty as capacity, as a form of institutionally realized agency. This is an important contribution which should make this impressive book of interest to anyone interested in state-building and sovereignty."—Nina Caspersen, University of York

"Sovereignty Suspended is a creative contribution to the cultural turn in state theory, presenting an original approach to state formation by focusing on the aspiration to statehood as a political and social situation sui generis, involving distinct methodological and theoretical problems for would-be citizens (as the authors call them) and scholars alike."—Carol Greenhouse, Princeton University