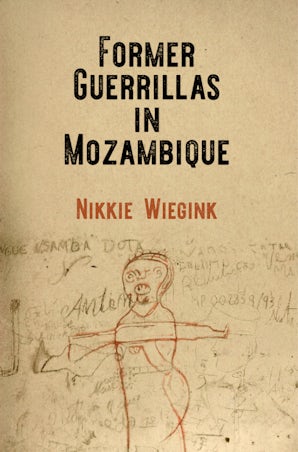 After sixteen years of civil war (1976—1992) between the Mozambican National Resistance (RENAMO) and the government of Mozambique, over 90,000 former combatants were disarmed and demobilized by a United Nations-led program. Former combatants were to find their ways as civilians again, assisted by community-based reintegration rituals. While the process was often presented as a success story of peace, renewed armed conflict involving RENAMO combatants in 2013 and onward suggests that the reintegration of former guerrillas was a far more complex story.

In Former Guerrillas in Mozambique, Nikkie Wiegink describes the trajectories of former RENAMO combatants in Maringue, a rural district in central Mozambique. Rather than focus on violence, trauma, and the reacceptance of these ex-combatants by the community, Wiegink emphasizes the ways in which RENAMO veterans have navigated unstable and sometimes dangerous social and political environments during and after the war. She examines the experiences of both male and female war veterans and their attempts at securing a tolerable life.

Based on fourteen months of fieldwork conducted long after the war ended, Former Guerrillas in Mozambique offers a critique of a notion of reintegration that assumes that the lives of former combatants are shaped first by a break with society when joining the armed group and later by a break with the past when demobilizing and a return to a status quo. Wiegink argues, instead, that former combatants' motivations, experiences, and interactions are not necessarily characterized by a rigid separation from their RENAMO past, but rather comprise a mixture of ruptures and continuities of relationships and networks, including families, the spiritual world, fellow former combatants, political parties, and the state.

"[A] well-written and sensitively researched and inclusive ethnography about the Mozambican civil war and its post-war trajectories of Renamo excombatants in Maringue. The painstaking work of putting individuals back into local history is apparent here. Wiegink, during her time in Maringue, attempted to become integrated in the local community and use that opportunity to see how their lived experiences compare with the stories they told her. What differs from most ther recent analysis on Mozambique is that Wiegink treats the post-conflict individual and community responses as open-ended and seeks to understand anddescribehowtheseex-combatantsnavigate‘unstableandsometimesdangerous landscapes, seeking to increase their social possibilities and life chances’"—Journal of Southern African Studies

"Grounded in anthropological methodology even as it speaks directly to debates in development studies and international relations, Former Guerrillas in Mozambique provides an irrefutable case for integrating the rigorous study of the lives of the most marginalised into the analysis of state and international politics."—Journal of Southern African Studies

"With its in-depth ethnographic engagement, its synthesis of recent and classic studies of veterans, and its sophisticated use of the concept of the social navigation of persons through dynamic environments, Former Guerrillas in Mozambique is an important contribution to peace and conflict studies, political anthropology, the anthropology of kinship, and African studies."—Alice Wilson, University of Sussex