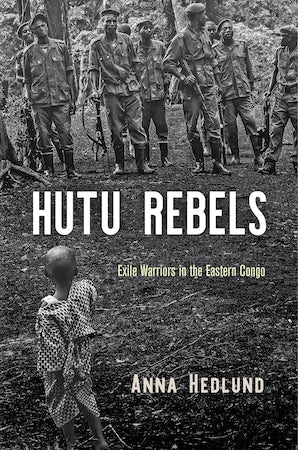 Exile Warriors in the Eastern Congo

In 1994, almost one million ethnic Tutsis were killed in the genocide in Rwanda. In the aftermath of the genocide, some of the top-echelon Hutu officers who had organized it fled Rwanda to the eastern Congo (DRC) and set up a new base for military operation, with the goal of retaking power in Kigali, Rwanda. More than twenty years later, these rebel forces comprise a diverse group of refugees, rebel fighters, and civilian dependents who operate from mountain areas in the Congo forests and have a long and complex history of war and violence. While media and human rights reports typically portray this rebel group as one of the most brutal rebel factions operating in the eastern Congo region, Hutu Rebels paints a more complex picture.

Having conducted ethnographic fieldwork in a rebel camp located deep in the Congo forest, Anna Hedlund explores the micropolitics and practices of everyday life among a community of Hutu rebel fighters and their families, living under the harshest of conditions. She describes the Hutu fighters not only as a military unit with a vision of return to Rwanda but also as a community engaged in the present Congo conflicts. Hedlund focuses on how fighters and their families perceive their own life conditions, how they remember and articulate the events of the genocide, and why they continue to fight in what appears to be an endless conflict. Hutu Rebels argues that we need to move beyond compiling catalogs of atrocities and start examining the "ordinary life" of combatants if we want to understand the ways in which violence is expressed in the context of a most brutal conflict.

"A fabulous book. Hutu Rebels is the first to provide an in-depth analysis of Hutu rebels and to present their own perspectives on the war and on their own situations. Anna Hedlund handily refutes stereotypes of rebel life as one defined by chaos and violence while also highlighting the boredom, normalcy, and everydayness that accompanies such a life. It is based on extraordinary ethnographic research and firsthand material, and the analysis is as nuanced as it is convincing and insightful."—Séverine Autesserre, author of The Trouble with the Congo: Local Violence and the Failure of International Peacebuilding