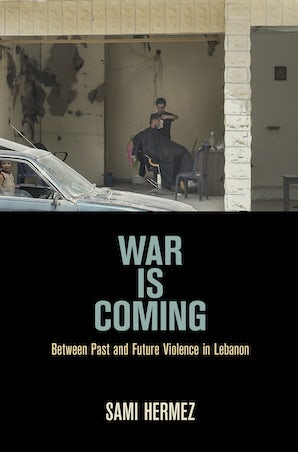 Between Past and Future Violence in Lebanon

From 1975 to 1990, Lebanon experienced a long war involving various national and international actors. The peace agreement that followed and officially propelled the country into a "postwar" era did not address many of the root causes of war, nor did it hold main actors accountable. Instead, a politics of "no victor, no vanquished" was promoted, in which the political elite agreed simply to consign the war to the past. However, since then, Lebanon has found itself still entangled in various forms of political violence, from car bombings and assassinations to additional outbreaks of armed combat.

In War Is Coming, Sami Hermez argues that the country's political leaders have enabled the continuation of violence and examines how people live between these periods of conflict. What do everyday conversations, practices, and experiences look like during these moments? How do people attempt to find a measure of certainty or stability in such times? Hermez's ethnographic study of everyday life in Lebanon between the volatile years of 2006 and 2009 tackles these questions and reveals how people engage in practices of recollecting past war while anticipating future turmoil. Hermez demonstrates just how social interactions and political relationships with the state unfold and critically engages our understanding of memory and violence, seeing in people's recollections living and spontaneous memories that refuse to forget the past. With an attention to the details of everyday life, War Is Coming shows how even a conversation over lunch, or among friends, may turn into a discussion about both past and future unrest.

Shedding light on the impact of protracted conflict on people's everyday experiences and the way people anticipate political violence, Hermez highlights an urgency for alternative paths to sustaining political and social life in Lebanon.

Sami Hermez is Associate Professor in Residence of Anthropology and director of the Liberal Arts Program at Northwestern University in Qatar.

"War is Coming is an ambitious ethnographic examination of Lebanon's long history of instability . . . [O]ne of the strongest virtues of War is Coming:[is] in its ethnographic detail and its determination to not impose closure, it embodies the Lebanese experience, and so humanizes people and processes so often dehumanized and caricatured within social scientific literatures on civil wars and the best-practices lingo of the post-conflict reconciliation industry."—Middle East Journal

"Deeply poignant. An eloquently written and altogether fascinating read about how violence is lived in multiple temporal registers in Lebanon, and how both remembering past and anticipating future violence critically shape lived experience in the present."—Lara Deeb, Scripps College