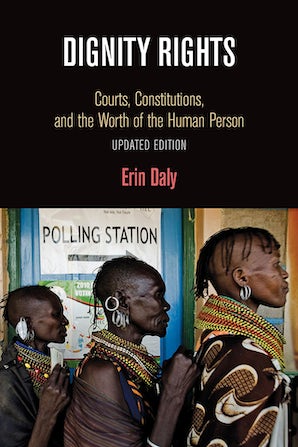 Courts, Constitutions, and the Worth of the Human Person

Originally published in 2012, Dignity Rights is the first book to explore the constitutional law of dignity around the world. In it, Erin Daly shows how dignity has come not only to define specific interests like the right to humane treatment or to earn a living wage, but also to protect the basic rights of a person to control his or her own life and to live in society with others. Daly argues that, through the right to dignity, courts are redefining what it means to be human in the modern world. As described by the courts, the scope of dignity rights marks the outer boundaries of state power, limiting state authority to meet the demands of human dignity. As a result, these cases force us to reexamine the relationship between the individual and the state and, in turn, contribute to a new and richer understanding of the role of the citizen in modern democracies.

This updated edition features a new preface by the author, in which she articulates how, over the past decade, dignity rights cases have evolved to incorporate the convergence of human rights and environmental rights that we have seen at the international level and in domestic constitutions.

Introduction
Chapter 1. "Of All Members of the Human Family"
Chapter 2. "Not . . . a Mere Plaything"
Chapter 3. "The Minimum Necessities of Life"
Chapter 4. "Master of One's Fate"
Chapter 5. "What Respect Is Due"
Chapter 6. "The Beginning and the End of the State"