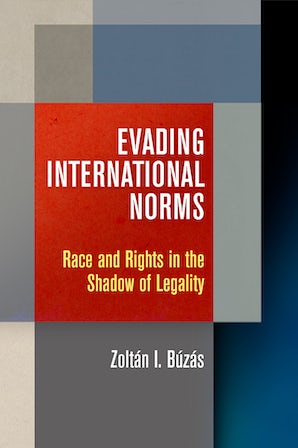 Race and Rights in the Shadow of Legality

How do states violate human rights norms after legalization? Why are these violations so persistent? What are the limits of legalization for protecting human rights norms? Conventional wisdom offers a variety of answers to these questions, but most often they conflate laws and norms and focus only on state actions that violate both. While this focus is undoubtedly valuable, it does not capture cases in which states violate human rights norms without technically violating the law. Norm breakers are not necessarily lawbreakers. Focusing exclusively on norm violations that are illegal obscures the possibility that agents could violate norms in a legal manner, engaging in actions that are awful but lawful.

Presenting rich case studies of the French expulsion of Roma immigrants from 2007 to 2017 and the Czech segregation of Roma children in schools for those with mild mental disabilities between 1993 and 2017, Evading International Norms argues that the violation of human rights norms often continues after legalization under the cover of technical legality. While laws and norms overlap, interact, and shape each other in many ways, they tend to reflect each other only selectively, which leads to the existence of norm-law gaps. Taking advantage of such gaps, states resist unwanted human rights obligations by transgressing international human rights norms without violating the laws designed to protect them—a process Zoltán I. Búzás names norm evasion.

Based on a wealth of evidence, including more than 160 interviews, the book shows that the treatment of the Roma by France and the Czech Republic violated the norm of racial equality in a technically legal fashion. Búzás cautions that the good news about law compliance is not necessarily good news about norm compliance and draws attention to racial discrimination against the Roma, one of the largest and most marginalized European minorities.

Part I. Background and Theory
Chapter 1. After Legalization: The Persistent Violation of International Human Rights Norms
Chapter 2. A Theory of Norm Evasion

"Zoltán I. Búzás successfully demonstrates how states use law to violate norms with reference to the Roma in Europe, and in doing so, shows that we have too often conflated norms and laws, looking only at practices that violate both, while ignoring the ways in which states may nominally comply with laws while violating the norms on which they are based. Evading International Norms is not only a brilliant contribution to our understanding of international law and norms but also an empirical contribution to the literature on race and international relations."—Charli Carpenter, University of Massachusetts-Amherst

"In Evading International Norms, Zoltán I. Búzás develops a new theory of norm evasion, exploring how and under what conditions states evade international legal norms, and tests his theory with two meticulously conducted case studies that provide new and important insights into the role of race and the rights of the Roma in international relations. The book is original, rigorous, and will have a clear and well-deserved impact on multiple fields of scholarship and public policy."—Mark Pollack, Temple University