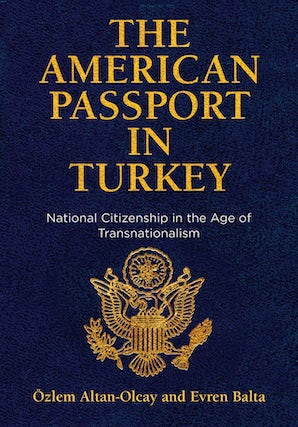 The American Passport in Turkey

National Citizenship in the Age of Transnationalism

The American Passport in Turkey explores the diverse meanings and values that people outside of the United States attribute to U.S. citizenship, specifically those who possess or seek to obtain U.S. citizenship while residing in Turkey. Özlem Altan-Olcay and Evren Balta interviewed more than one hundred individuals and families and, through their narratives, shed light on how U.S. citizenship is imagined, experienced, and practiced in a setting where everyday life is marked by numerous uncertainties and unequal opportunities. When a Turkish mother wants to protect her daughter's modern, secular upbringing through U.S. citizenship, U.S. citizenship, for her, is a form of insurance for her daughter given Turkey's unknown political future. When a Turkish-American citizen describes how he can make a credible claim of national belonging because he returned to Turkey yet can also claim a cosmopolitan Western identity because of his U.S. citizenship, he represents the popular identification of the West with the United States. And when a natural-born U.S. citizen describes with enthusiasm the upward mobility she has experienced since moving to Turkey, she reveals how the status of U.S. citizenship and "Americanness" become valuable assets outside of the States.

Offering a corrective to citizenship studies where discussions of inequality are largely limited to domestic frames, Altan-Olcay and Balta argue that the relationship between inequality and citizenship regimes can only be fully understood if considered transnationally. Additionally, The American Passport in Turkey demonstrates that U.S. global power not only reveals itself in terms of foreign policy but also manifests in the active desires people have for U.S. citizenship, even when they do not intend to live in the United States. These citizens, according to the authors, create a new kind of empire with borders and citizen-state relations that do not map onto recognizable political territories.

"Providing a multifaceted analysis of citizenship and identity and the choices people make when confronted with political and economic conundrums, the book will be of interest to scholars of citizenship studies, migration studies and anyone interested in questions of identity, mobility, transnationalism, as well as gender, space and politics . . . [T]he book [does] a remarkable job in showing the most perplexing element of the imaginaries of citizenship in the age of transnationalism: how deeply individualized the choices and imaginaries were, extending as far out as to immediate loved ones--children, partners, parents--and how one's view of one's life trajectory revolved predominantly around education and work."—Gender, Place & Culture

"One of the recurrent debates of migration studies in the global era is whether the dynamics of globalization challenge the prominence of nation states and traditional models of citizenship. OzlemAltan-Olcay and Evren Balta make a remarkable contribution to this discussion . . . Altan-Olcay and Balta's analysis is powerful insofar as it grasps both the endurance of structural sources of inequality (institutions) and the contingent outcomes of individuals' strategic choices that may lead to further mobilities (interests), as well as the symbolic meanings they attribute to citizenship (identities)."—Inernational Migration

"The American Passport in Turkey is a fascinating contribution to our understanding of the place of citizenship in the wake of globalization."—Peter J. Spiro, Temple University

"In our day and age of rising inequalities and insecurities, Özlem Altan-Olcay and Evren Balta offer an important and original exploration of the meaning of national citizenship, especially that of a hegemonic world power, in the context of increased globalization and transnationalism."—Zehra F. Kabasakal Arat, University of Connecticut