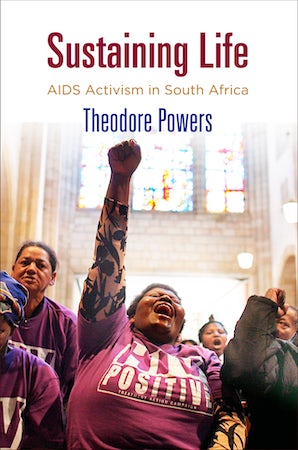 An ethnographic account of the South African AIDS movement and activists

From the historical roots of AIDS activism in the struggle for African liberation to the everyday work of community education in Khayelitsha, Sustaining Life tells the story of how the rights-based South African AIDS movement successfully transformed public health institutions, enabled access to HIV/AIDS treatment, and sustained the lives of people living with the disease. Typical accounts of the South African epidemic have focused on the political conflict surrounding it, Theodore Powers observes, but have yet to examine the process by which the national HIV/AIDS treatment program achieved near-universal access.

In Sustaining Life, Powers demonstrates the ways in which non-state actors, from caregivers to activists, worked within the state to transform policy and state-based institutions in order to improve health-based outcomes. He shows how advocates in the South African AIDS movement channeled the everyday experiences of poor and working-class people living with HIV/AIDS into tangible policy changes at varying institutional levels, revealing the primacy of local action for expanding treatment access. In his analysis of the transformation of the state health system, Powers addresses three key questions: How were the activists of the movement able to overcome an AIDS-dissident faction that was backed by government power? How were state health institutions and HIV/AIDS policy transformed to increase public sector access to treatment? Finally, how should the South African campaign for treatment access inform academic debates on social movements, transnationalism, and the state?

Based on extended participant observation and in-depth interviews with members of the South African AIDS movement, Sustaining Life traces how the political principles of the anti-apartheid movement were leveraged to build a broad coalition that changed national HIV/AIDS policy norms and highlights how changes in state-society relations can be produced by local activism.

"Sustaining Life provides an excellent introduction to anyone interested in knowing more about how South African AIDS activists—primarily those working as part of the Treatment Action Campaign (TAC)—developed its political campaign for demanding access to life-saving HIV treatment for all South Africans…a very clearly and engagingly written book."—Medical Anthropology Quarterly

"Sustaining Life provides an ethnographic and historically grounded rendering of HIV/AIDS activism in South Africa that successfully led to near universal access to HIV/AIDS treatment. It is a tremendous contribution to the literature on the HIV/ AIDS crisis in Africa and it is a story that needs to be told."—James Pfeiffer, University of Washington