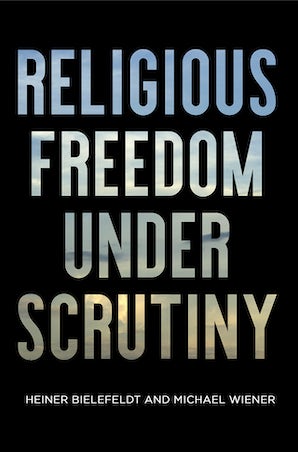 Freedom of religion or belief is deeply entrenched in international human rights conventions and constitutional traditions around the world. Article 18 of the Universal Declaration of Human Rights enshrines the right to freedom of thought, conscience, and religion as does the International Covenant on Civil and Political Rights, which the United Nations General Assembly adopted in 1966. A rich jurisprudence on freedom of religion or belief is based on the European Convention on Human Rights, drafted in 1950 by the Council of Europe. Similar regional guarantees exist in the framework of the Organization of American States as well as within the African Union. Freedom of religion or belief has found recognition in numerous national constitutions, and some governments have shown a particularly strong commitment to the international promotion of this right.

As Heiner Bielefeldt and Michael Wiener observe, however, freedom of religion or belief remains a source of political conflict, legal controversy, and intellectual debate. In Religious Freedom Under Scrutiny, Bielefeldt and Wiener explore various critiques leveled at this right. For example, does freedom of religion contribute to the spread of Western neoliberal values to the detriment of religious and cultural diversity? Can religious freedom serve as the entry point for antifeminist agendas within the human rights framework? Drawing on their considerable experience in the field, Bielefeldt and Wiener provide a typological overview and analysis of violations around the world that illustrate the underlying principles as well as the relationship between freedom of religion or belief and other human rights.

Religious Freedom Under Scrutiny argues that without freedom of religion or belief, human rights cannot fully address our complex needs, yearnings, and vulnerabilities as human beings. Furthermore, ignoring or marginalizing freedom of religion or belief would weaken the plausibility, attractiveness, and legitimacy of the entire system of human rights.

"With such a readable style, the careful synthesis of disciplines, and selfevident wealth of years of careful thought and experience on some of the most intransigent issues facing religious freedom, the authors manage to speak powerfully and authoritatively on the issues they raise. They do indeed provide conceptual clarity, skilfully synthesizing the disciplines within which they work. This book is a masterpiece and a must-read for academics and practitioners alike interested in the philosophical, political, legal, and constitutional implications at both national and international levels, of the right to religious freedom in the 21st century."—Oxford Journal of Law and Religion

"Offering a measured, deliberative, and erudite engagement with a range of critiques leveled against human rights discourses in general, and with regard to religious freedom in particular, Religious Freedom Under Scrutiny represents an informed perspective on a contentious set of debates. Scholars and practitioners alike will find the volume important reading."—Christopher Dole, Amherst College