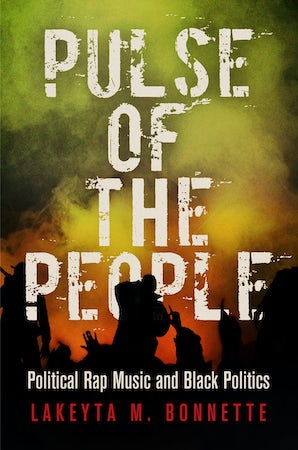 Pulse of the People

Hip-Hop music encompasses an extraordinarily diverse range of approaches to politics. Some rap and Hip-Hop artists engage directly with elections and social justice organizations; others may use their platform to call out discrimination, poverty, sexism, racism, police brutality, and other social ills. In Pulse of the People, Lakeyta M. Bonnette illustrates the ways rap music serves as a vehicle for the expression and advancement of the political thoughts of urban Blacks, a population frequently marginalized in American society and alienated from electoral politics.

Pulse of the People lays a foundation for the study of political rap music and public opinion research and demonstrates ways in which political attitudes asserted in the music have been transformed into direct action and behavior of constituents. Bonnette examines the history of rap music and its relationship to and extension from other cultural and political vehicles in Black America, presenting criteria for identifying the specific subgenre of music that is political rap. She complements the statistics of rap music exposure with lyrical analysis of rap songs that espouse Black Nationalist and Black Feminist attitudes. Touching on a number of critical moments in American racial politics—including the 2008 and 2012 elections and the cases of the Jena 6, Troy Davis, and Trayvon Martin—Pulse of the People makes a compelling case for the influence of rap music in the political arena and greatly expands our understanding of the ways political ideologies and public opinion are formed.

"Pulse of the People masterfully marries political psychology scholarship and research methods with the growing literature on the ever increasing impact of Hip-Hop culture both nationally and globally."—Melanye Price, Rutgers University