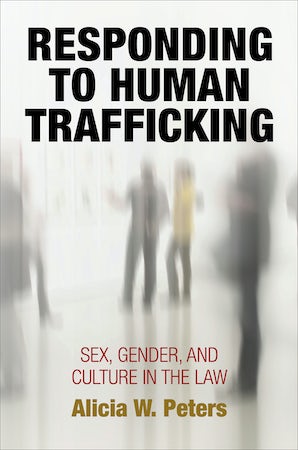 Sex, Gender, and Culture in the Law

Signed into law in 2000, the Trafficking Victims Protection Act (TVPA) defined the crime of human trafficking and brought attention to an issue previously unknown to most Americans. But while human trafficking is widely considered a serious and despicable crime, there has been far less consensus as to how to approach the problem—owing in part to a pervasive emphasis on forced prostitution that overshadows repugnant practices in other labor sectors affecting vulnerable populations. Responding to Human Trafficking examines the ways in which cultural perceptions of sexual exploitation and victimhood inform the drafting, interpretation, and implementation of U.S. antitrafficking law, as well as the law's effects on trafficking victims.

Drawing from interviews with social workers and case managers, attorneys, investigators, and government administrators as well as trafficked persons, Alicia W. Peters explores how cultural and symbolic frameworks regarding sex, gender, and victimization were incorporated into the drafting of the TVPA and have been replicated through the interpretation and implementation of the law. Tracing the path of the TVPA over the course of nearly a decade, Responding to Human Trafficking reveals the profound gaps in understanding that pervade implementation as service providers and criminal justice authorities strive to collaborate and perform their duties. Ultimately, this sensitive ethnography sheds light on the complex and wide-ranging effects of the TVPA on the victims it was designed to protect.

PART I. TRAFFICKING ON THE BOOKS
Chapter 1. A Dichotomy Emerges

APPENDICES
A. Data Archiving Requirements and Threats to Confidentiality
B. Interviewees Quoted in the Text

"Alicia Peter's ethnography provides the most lucid analysis of the immensely contested operations of human trafficking response that I have ever read. It illuminates how cultural beliefs and values about gender, sexuality, and victimization have fractured the interpretation and implementation of the law in different sites."—Sealing Cheng, author of On the Move for Love: Migrant Entertainers and the U.S. Military in South Korea

"Responding to Human Trafficking is an important contribution to the literature on human trafficking. Alicia W. Peters successfully takes us inside the maze of the anti-trafficking regime, illustrating conflicts in priorities, challenges in advocacy work, and the continued need to design a victim-centered system."—Rhacel Parrenas, University of Southern California

"Alicia W. Peters illustrates the ways in which ideology is incorporated into U.S. anti-trafficking law. With unprecedented access to service providers working with victims of trafficking in New York City, federal officials, and a number of victims, Peters suggests how to utilize survivors' stories to frame future research and how to use their voices in the policy debates."—Elzbieta Gozdziak, Georgetown University